Romantic Comedy anime a.k.a rom-com anime are the kind of anime that’ll make you go from “Oh wow, this anime is really funny” to “Damn, don’t make me cry” and make you feel a range of emotions.

Rom-com anime are perfect blend of comedy and some serious romantic drama. But ofcourse, there are some rom-com anime, that are through and through all fun and games. I’ve made sure to include both kinds in this listing! Enjoy!!

“It is alright, if they are not blood related.” You must keep this in mind while watching this show. It might not be as “bad” as kiss x sis, but it still is an incest anime.

This anime is more on the fun side of the scale, although it may have a little serious moments here and there.

Eromanga sensei is about a hikkimori sister who is an erotica illustrator and her step-brother who is a novel author.

Despite the rating given to this anime, it is actually enjoyable. If you’re looking to have some fun watching anime this is the one for you.

This anime is very similar to Eromanga sensei, but better. The main protagonist is a novel author who is very obsessed with sisters. His wish to have a little sister made him to fantasize about them and eventually led him to become an author.

And then there is this perverted, under-aged girl (yeah, the one in the image above) who is interested in him and hits on him every chance she gets.

A sister is all you need is about a group of authors writing their novels and making it into an anime, and having fun playing games and traveling places with each other.

This anime is about a boy, who is a son of the Mafia and a girl who is the daughter of  the American Bee Hive Gang.

They  are forced to act as lovers in order to prevent an all out war between the two groups (And thus the name Nisekoi=Fake love.)

Although they started off on bad terms with each other, their situation to act as boyfriend and girlfriend got them closer and the fake love becomes the real deal.

Meanwhile there is a harem of girls who has a crush on the MC and you know, the usual harem and love triangle stuff.

Chuunibyou, also known as 8th grader syndrome is a case where the patient is extremely delusional and thinks they have some kind of mystical power and are always living in a fantasy realm.

The main character who is an ex-chuunibyou goes to a high school far away from his middle school in order to escape his embarrassing middle school memories of being the “Dark flame master.”

However, there he meets a chuunibyou girl – the self proclaimed vessel of the “Wicked eye.”

This anime has a very hilarious and a heart warming story that’ll make you want for more.

This is a special kinda rom-com anime. Unlike any other anime in this listing, Tsurezure children doesn’t have one MC or one story.

It has multiple couples and multiple stories which are shown side by side. And the episodes span for only about 15 minutes.

I was skeptical before watching this anime. I haven’t watched much of shoujo anime and was under the impression that they’d be boring.

But Monthly Girls’ Nozaki-kun turned out to be a gold! It was a super entertaining, super interesting and a super funny anime which exceeded my expectations and shattered my previous belief that shoujo anime are slow and boring.

The main male character is an odd ball. He looks big and buff, but is a totally different person on the inside contradictory to what one would judge him to be by his appearance. He goes and does dumb and embarrassing stuff just to get some reference for his manga, and doesn’t realize that someone has a crush on him (all the way till the end of the anime.) 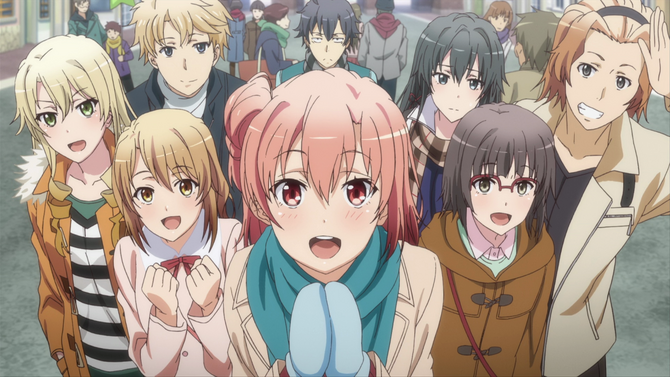 Hachiman is mood. What else can I say. This anime is about social misfits who gather together in a club meant for helping people.

The main character, Hachiman Hikigaya has extreme narcissistic and semi-nihilistic tendencies. He firmly believes that the joyful live of the youth is nothing but a farce, and everyone is just lying to themselves.

Although Hachiman is literally “love resistant” in the beginning, spending time with the girls (yes, we have another love triangle here) gets him into emotions and confusions that he had never experienced before.

From this point onward, we’re looking at anime that perfectly balances the romantic drama and the comedic elements – a.k.a the royals of rom-com anime. They are fun in the beginning and tense half way through.

This anime is about a bunch of “troublesome kids” who are put into a separate dormitory called “Sakurasou” where they get to be their freaky self without disturbing anyone else.

The main character moves to Sakurasou even though he is a normal person with no abnormal personality, because they didn’t allow cats in the normal dormitory.

Thus he gets to know some rather interesting characters and his life gets shifted to something more eventful and fun.

Toradora! – The anime which has a kind and soft male MC with killer eyes who likes to do housework, a badass but cute tsundere female MC and a super energetic red-haired side character.

These characters alone are enough to make things interesting, I say.

Toradora! is a cute and heartwarming anime about how these polar opposite characters discover each other and fall in love with each others and overcome the difficulties of life together.

If you’re going to watch this anime, you better brace yourself. This is the legendary anime that has left several people depressed for days after the show ended.

The first season of this anime is pure fun and is really enjoyable, but the second season… It will emotionally devastate you.

Everything about this anime is just perfect. The story, the comedy, the music (dango dango~), the characters and the animation too (although it is a bit old styled.) In short, it is a masterpiece.

This anime is not only about your average high school romance, but also about the life after high school. It shows the ups and downs of leading ones life in its truest form.

3 replies on “Best Rom-Com Anime You Must Watch”

[…] Girls’ Nozaki-kun is an amazing rom-com anime about a cheerful girl, Sakura Chiyo who has a crush on  Umetarou Nozaki. When she finally musters […]

[…] It’s funny, and especially Kaoru and her family are so strong. The author did not just stop at romance and comedy but also included sad stories about the characters’ […]