Anime girl with scar are rare to come by. These scarred beauties are tough and are often a badass who are good at fighting.

Here are some of the hottest anime girl with facial scars.

Tsukuyo is one of the characters from Gintama. And she is the reason why I decided to make a post on anime girl with scars.

She scars herself in order to let go of her femininity and become the guardian of the woman she admires.

However it is really cute when her feminine side shows up after meeting with the Yorozuya trio.

Mahiru a.k.a Shinya is one of the main characters of  Akuma no Riddle.

As a former assassin she has developed dual personalities; where one is shy and mysterious. And the other one is violent and rude.

Frederica Sawyer a.k.a Sawyer the Cleaner is one of the characters from Black Lagoon who excels in body disposal.

Using a chainsaw as her weapon she disposes off her enemies in the most gruesome way possible.

She talks with the help of an electrolarynx as her throat was cut at some point in her past. 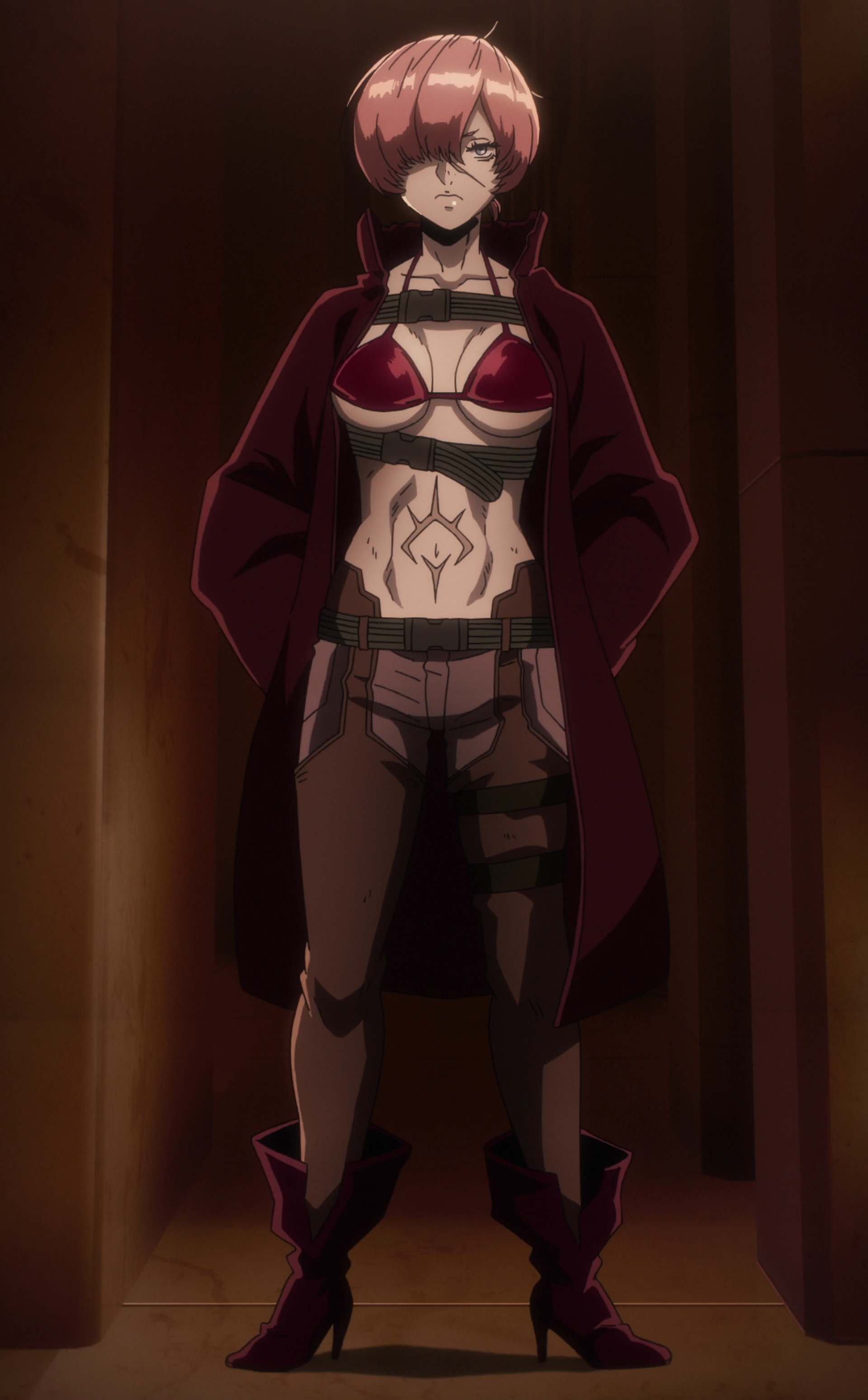 Pepper is a minor character from the antagonist group in No guns life. There’s really not much history to her. She fought the main character once and was defeated.

Ahega kuki is one of the great four from They Are My Noble Masters, Kimiaru who succeeds as the new head of the Kuki Group.

As a part of the Kuki family tradition she was given a cross shaped scar on her forehead at birth.

Tokiko Tsumura is the second most important character in the anime Buso Renkin.

She is an alchemist warrior who is a part of the alchemist army.

As you can probably tell from her expression in the image above, she is a pretty serious character. She doesn’t like to see people lollygagging around and dislikes it when someone asks about her scar.

Cute Anime Girl With Scar On The Face

Chris is a minor character in Konosuba. The only memorable scene with her is when Kazuma steals her underwear using his new “steal” skill. Other than that she doesn’t really have any influence in the story.

Mika is a character from Durarara!! – an awesome action packed slice of life anime.

Knowing this she decides to surgically change her face so that she could look like the head and the boy could love her. That’s how she got her scar in the neck. And the best part is she goes through the surgery without any anesthesia.

Assassin of the black a.k.a Jack the Ripper a legendary serial killer and one of the servants from Fate/Grand Order. She is a summon of Hyouma Sagara, however becomes Reika’s familiar soon after.

Yuki is one of the main characters of Release the Spyce.  She’s a former leader of Tsukikage.

As a child she trains day in and day out so that she could become the perfect heir for her family Dojo. Seeing her skills in battle, a member of Tsukikage invites her to join them.

Rin is one of the main characters from the anime Toriko.

She is the third highest ranked official Gourmet Research Chief of IGO.

She uses perfumes to manipulate the state of mind of the beasts.

Whoever thinks that anime girl with facial scar can’t look beautiful will have to think twice after seeing klaud.

Klaud Nine is one of the strongest characters and the only female exorcist general from D Gray man.

She is always brings her pet Lau Shimin along with her.

Nice Holystone is a major character from Baccano! She loves bombs and is an explosive expert. Due to an incident when she was young, her body is full of scars.

She covers her empty right eye socket with an eye-patch and wears glasses because of the problems in her left eye.

Nel is a character from Bleach. She was initially introduced as a cute little loli (child) character.

But later on they revealed that she was actually an adult who transformed into a child and that she had lost her memory because of taking a blow to her head.

Okay, Inazuma is a man from One piece. But at this frame (image above) and time he did become a girl because of the powers of another character.

But hey, he actually looks pretty neat as a women and there’s a scar too. That’s all I need to include him in this listing!

Balalaika is the villain of Black lagoon. She is the boss of Hotel Moscow. Before she joins the mafia she was the captain of Soviet army.

The burn marks on her body were battle scars that she got from the war in Afghanistan.

Rider is one of the characters from Fate Extra. She has also been featured in the video game version of this series.

She was summoned as a servant of Shinji Matou in the Moon Holy Grail War.

She is one of the generals of the Westelande army as well as a member of the Ten-Seat Council.

Lady is a supporting character in Devil May Cry anime. Dante gave her the name “Lady”. However, her real name is Mary.

She is a human devil hunter who occasionally works with Dante to hunt devils. Furthermore, she is skilled at handling guns, grenades and other modern warfare weapons.

That’s all for this post. They were all the hottest anime girl with facial scar. Hope you enjoyed this post (^^)

One reply on “Anime Girl with Scar – 15+ Hottest Scarred Beauties”

[…] after being forcibly branded. Nami with Nako decided to try to remove it with a knife but got a scar in the process. She later covered up the remains of the old tattoo with her mandarin/turntable […]